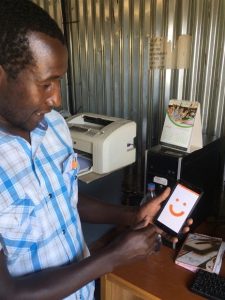 Headquartered out of Eldoret, Kenya, Bles Dairies East Africa is currently carrying out a pilot project for the Intelligent Dairy Farmers’ Assistant (Ida), which has started on three different dairy farms in the region. Since the moment that this heat detection and health monitoring system has been installed, the farmers have not only experienced an increase of the milk production and a more accurate heat detection, but it has also made supervision on the farm easier.

The Ida sensors monitor different behaviours of the cow, such as eating, ruminating, laying, walking, lameness, standing and drinking. The data is then analysed in the cloud, subsequently Ida alerts and advises the farmer via an App on three key elements: heat, health and feed.

Since the start of the pilot project, the farmers have noticed significant changes. For example at Illula Farm, where manager John Magut is enthusiastic about the new technology, that makes use of artificial intelligence. “I am amazed to see how Ida monitors the behaviour of my cows. The observations I used to make with the naked eye are only a small part of what is really going on with the cows! The Ida technician could even tell me at what time we feed our cows, only by looking at the activity graphs!”

Illula Farm has experienced an enormous increase of milk production in 2018. Ida showed the farmer for example that their cows ate less while outside the stables, due to non-sufficient and less quality feed. With the assistance of Ida, that monitored the rumination and eating patterns of the cows, the farmer was able to change the feed rations and so improved the feed conditions of the cows.

At another pilot farm – Seregon Farm – the feed rations have also been adjusted, since Ida showed them that there was a lot to be gained from improving the rumination time. The farmer has changed the chopping size of the fodder and reduced the amount of concentrates in the feed. These small modifications have improved the general  cow condition. “Besides that, Ida has not only helped us improve the heat detection, but also shows early signs of health issues,” explains veterinary Ms. Winny Chebii. “We were able to notice a cow had been trapped in a cubicle, because Ida showed us that the cow had been laying for hours. From far away, the cow looked okay, but from nearby we discovered bruises, caused by the struggling with the cubicle metals.

Ida is only one of the services provided by Bles Dairies East Africa and its Dairy Advisory Services. Do not hesitate to contact us for more information!