The Netherlands, guiding in agriculture

Last January, Member of the European Parliament Jan Huitema gave a presentation during the Bles Dairies New Year Event at the Frisian Agricultural Museum. He emphasized that the Netherlands is frontrunner within the global agricultural sector and that the Dutch play an important exemplary role for other countries. We interviewed him about this vision for the dairy sector:

What indicates that the Netherlands is a guiding country?
“Dutch dairy farmers are the living proof of this idea,” says Huitema. “The agricultural industry in the Netherlands has, for instance, the smallest ecological footprint in the world.” This is partly thanks to high production levels, the reuse of waste materials and a low percentage of food waste. “Another aspect is the use of antibiotics, which is relatively lower than in other countries. Animal welfare also stands out! In addition, the leading knowledge and innovations are also contributing to this.”
According to Huitema, “the geographical location of the country is very favourable, with a good climate for the dairy sector. On the other hand, the country has to face challenges as well. Dairy farmers do not have large size lands available, the human population is high and there is a lot of water. And yet, dairy farmers are doing very well. This makes them an example for others!”
Huitema subsequently called the Netherlands “the Silicon Valley” of the agricultural world, with its Dairy Campus in Leeuwarden. “Colleagues from other European countries look at the Netherlands and wonder how do they do it?”

How can the Netherlands keep their leading and thus guiding position?
“We have to ensure that we keep up our good name, only then other countries will continue awarding us that position. For example, we must do everything we can to prevent negative issues from happening, such as fraud with manure, when farmers are dumping more manure on their land than allowed. Besides that, it is important to have a strict and good supervisory body. The EU Nitrates Directive sets a strict maximum threshold for the use of animal manure, of 170 kilograms of nitrogen per hectares. The Netherlands is granted to utilise the option of derogation, which allows a conditional 250 kilograms of nitrogen per hectare for farms with grazing livestock.

What is the importance of the guiding role for the Netherlands?
“Many existing problems in the world are caused by food shortage. The Netherlands contributes enormously in the world food security, whether it is in knowledge, starting material or agricultural products.
As a result of climate change, the situation around the equator will change drastically. Their agricultural production will decline within the coming years, but the population will continue to grow. It is therefore at the utmost importance that we remain to keep our exemplary role.”

What is the risk that the Netherland loses its guiding position?
“It does not seem likely that the Netherlands will lose this role. That is what they said five years ago about Eastern European countries, but they have not caught up with us yet. The differences are so big in terms of logistics and location, that I do not expect it will change any time soon.”

How do you contribute yourself?
“In Brussels, I try to contribute in two ways. Firstly, we continuously insist on European regulation and legislation that does not hamper innovative activity, whereas the more flexible EU regulation is, the better innovation can be stimulated. Laws and regulations should be workable for farmers and there should be room for new technologies, otherwise we are slowing ourselves down. Secondly, it is important to focus on achieving goals instead of on taking measures to achieve goals.’

To conclude, we would like to know your opinion about Bles Dairies’ activities
“I am a supporter of exporting knowledge, starting material and agricultural products, such as Bles Dairies does. We do not have to worry about losing our guiding position to other countries. Exporting these three agricultural aspects form merely part of the Dutch guiding role.” 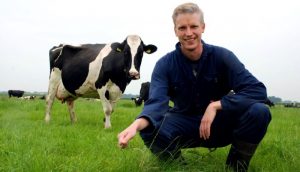