Bles Dairies East Africa entered into a partnership with Chepseon Dairies in Kericho, Kenya, starting a project with the goal to transfer practical dairy knowledge to local dairy farmers in East Africa. In order to improve the milk production and so the income of the dairy farmers, they need to develop their knowledge and improve their technical skills. Chepseon Dairies will be used as a model farm, facilitating future trainings.

Bles Dairies’ intern Diederik van der Valk, student at Van Hall Larenstein in Leeuwarden, the Netherlands, has returned from his 3 months internship at Chepseon’s dairy farm and explains which changes the project underwent recently. “Firstly, the farm needs to undergo several transformations in improving management and preparing the farm to become a home base for dairy trainings,” says Diederik. He has been working amongst others on the feed rations and breeding strategy. “I was able to monitor the animals by placing tags on them. Subsequently, we identified the different types of available forage and feed, as well as the customs and traditions in the Kenyan dairy sector.” By making small changes in the daily feeding and management routines, the average daily milk production per cow increased from 14L to well over 20L! “Problem is that the milk storage tank capacity proved to be too small…,”adds Diederik enthusiastic.

Furthermore, the farm has made great progress on the subject of young stock rearing, with striking growth rates from under 500 grams to over 850 grams per calve per day! This is an important aspect of sustainable dairy farming, since the present young stock is the future cow. The farmer will now be able to inseminate the heifers in an earlier stadium, which will subsequently reduce the age at first calving. In addition, at the end of November grass silage was introduced at the farm, improving the quality of the self-produced roughage. This helps increasing the production even more and reducing the milk production costs.

Over a short period of time, many changes have been made at Chepseon Dairies in Kericho. Diederik feels proud having helped making the necessary improvements over the last three months. “Running a dairy farm in Kenya brings challenges of different sorts. The procured feed, for example, is not standardized in rations nor it has been checked. On top of that, there is not always enough feed available, trying to keep the aflatoxins out of the milk.” Diederik’s internship has concluded, but the project will continue. “Slowly we will get there, one step at a time,” says Eric Koech, manager at Chepseon Dairies. 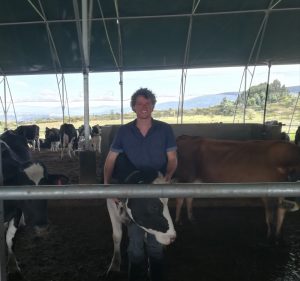