Bles Dairies was involved in interim farm management for a dairy farm start-up in China. We temporarily managed the dairy farm with 1.200 dairy cows and 700 ha land of a Chinese dairy organisation. An experienced farm manager, supported by dairy experts in the field of nutrition and animal health, ran the farm. The first targets in this assignment were roughage production and insemination of all young stock, whose first calvings took place autumn 2016. Dutch veterinarians were involved in training the calving crew. Besides farm management, we set up an investment and exploitation budget for modernising the dairy farm based on the latest developments and technologies, under which robotic milking.

This farm was also the location for a grass cultivation demonstration, which was another project our consultancy business was involved in. During 2015 and 2016 activities were undertaken to start grass cultivation in China with materials of Dutch companies. The purpose was to demonstrate the applicability of grass cultivation to replace expensive imports of alfalfa and to promote Dutch technology. The first grass demonstration wasn’t very successful because the pH value of the plots was too high. For a better demonstration, a full season including a feed trial was completed at this started-up farm. Local authorities were impressed by the quality and appearance of grass.

After preparing the plans this farm decided to work organically. For complying with organic certification, the farm has to grow a large part of its own protein requirement. This is also why the farm is growing annual grasses next to the usual corn silage. Organic fertilizing is used and the grass looks perfect. Next year, own fermented manure after biogas production will be used and that will yield even better results. The idea is to perform closed circle farming as much as possible. 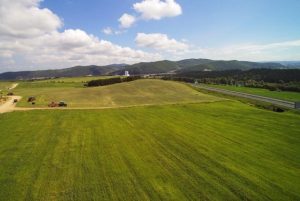 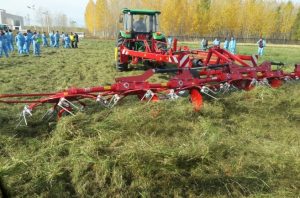